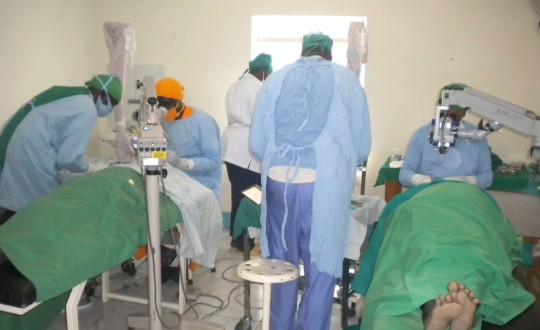 A cataract operation in progress

Until 2007, the town of Yei with over 100,000 inhabitants was served by a very small eye clinic.  Its equipment was extremely limited and much of it was broken. There were few medicines. Its building was in poor condition and its staff had received little or no recent ophthalmic training. The number of people using the clinic dropped to two or three per day and its main activities were the twice yearly cataract camps organised by a specialist eye team from Uganda.  The NGO that operated the clinic wanted to pull out and offered the clinic and staff to the Diocese of Yei, which operated a thriving Primary Health Care Centre right next door.  The Diocese declined as the NGO could offer only one year’s funding and even that was inadequate to renovate the buildings and establish a proper eye clinic. And so in 2008, it closed its doors. 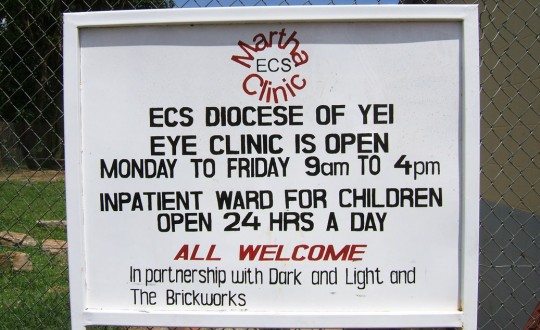 Two years later, in November 2010, thanks to Light for the World (formerly Dark and Light) and The Brickworks, the Martha Eye Clinic was opened.  It operated from a fully refurbished building paid for by The Brickworks, which it shared with a small inpatient ward for children. The eye clinic has a consulting room and an operating theatre, which can be used for cataract surgery. Since it opened in 2010, over 400 patients have had their sight restored through cataract surgery. 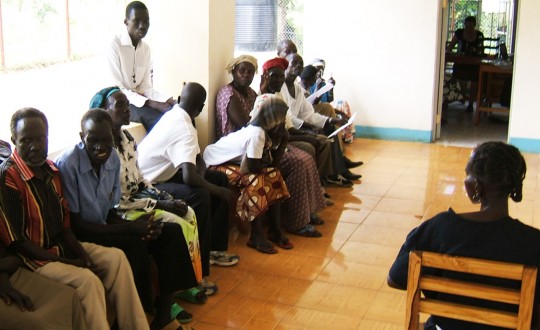 Queues on the opening day …

On the day it opened, queues formed and 28 patients were helped.  Some had received treatment, some had been fitted for spectacles or had been written down for surgery at a later date. Dr Trevor Buchanan, a consultant ophthalmic surgeon from Royal Victoria Hospital, Belfast was visiting to guide the new staff and was able to help a young man who had had a foreign body in his eye for the last month.  “It was a very fulfilling and worthwhile day.  We handled everything that came through the door. I worked closely with the newly trained Clinical Officer, Abui Simon, who was extraordinary – well trained, enthusiastic and keen to learn. I can say that this one day made my whole trip immensely worthwhile.”  Dr Trevor and Abui Simon were assisted by Mrs Pam Whitehead, wife of a Brickworks trustee and an optometrist from Southampton General Hospital.  “I saw an amazing range of eye conditions, many more advanced than I would normally see as the patients had waited so long to get help as, until today, there was no proper eye service in Yei.”

Unfortunately, between July 2016 and March 2019, the clinic closed due to insecurity and lack of qualified staff but thanks to a generous grant from St Michael’s Church, Bristol, it has now re-opened and up to 50 patients per week are receiving treatment or being fitted for spectacles.

To facilitate a cataract camp in 2021 to treat the high number of patients waiting for surgery.

South Sudan has the highest incidence in the world of infective eye disease.