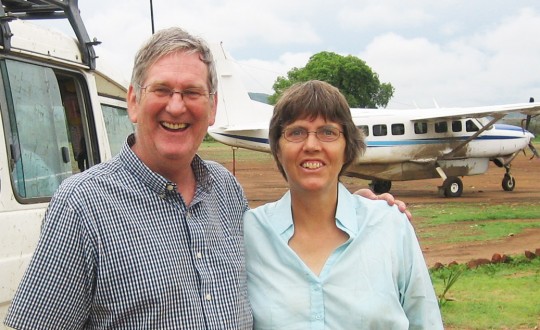 John and Poppy Spens worked in South Sudan for nearly five years from 2006 to 2011. Poppy developed several health programmes while John initially coordinated a vocational training college and micro enterprise scheme and later managed a number of school construction and water and sanitation projects. In 2008, they founded The Brickworks and in 2009 The Brickworks became a registered UK charity. The purpose of The Brickworks is to raise money to support projects in South Sudan.

Our goal is that every penny given to The Brickworks will be used to fund projects in South Sudan and, from 2017, to help South Sudanese refugees living in Uganda. We use a small amount of the tax we recover from gift aid payments to meet our small administrative costs (such as website maintenance) but the majority of the tax recovered is added to the sums that we send to South Sudan. You can view a copy of our most recent annual report and accounts on the Charity Commission’s website.

The Brickworks has six trustees. John and Poppy Spens are the current Chairman and Secretary. The other four Trustees are Revd Brian Wakelin, Assistant Minister of Christchurch Winchester; Malcolm Lemon, Mike Whitehead and Dr Ben Sharpe.  All the trustees have visited South Sudan in the last five years, some of them several times. When travelling to South Sudan or Uganda, the trustees meet their own travel costs.